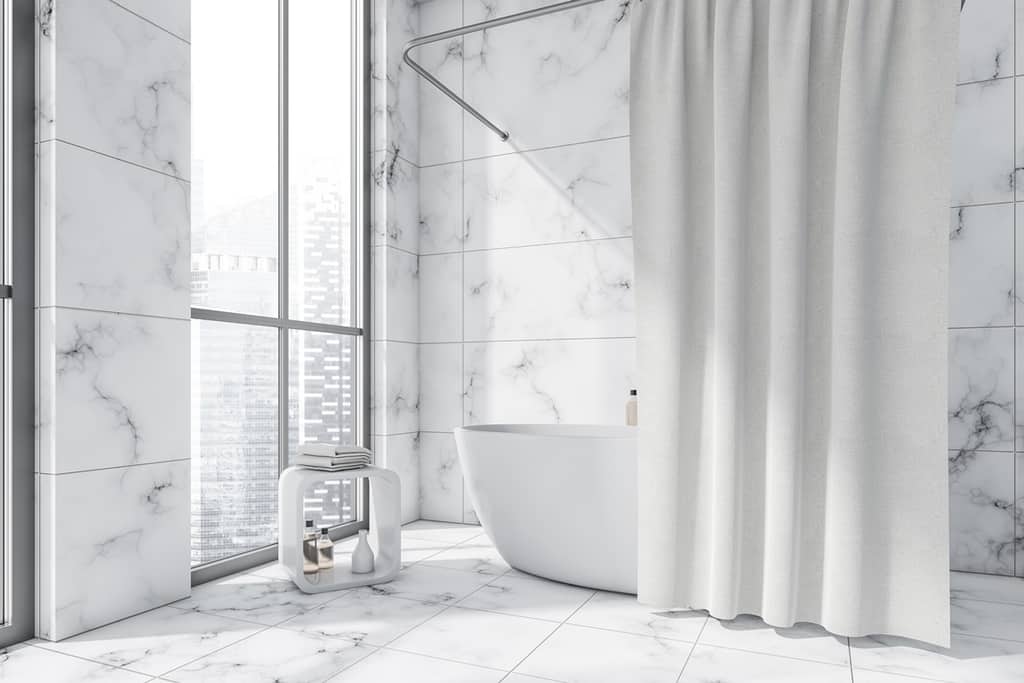 Glass-enclosed and open showers may look stunning on social media, but not all of us have such a sleek and modern-looking design in our bathrooms. Most of us have a standard tub and shower combo. With this setup, you need a shower curtain. This decorative curtain looks beautiful and helps keep the rest of your bathroom clean and dry. However, for your shower curtain to be effective, it needs to be the right length.

Follow this handy guide to learn how to measure for and buy the right size of shower curtain for your bathroom.

What Size Shower Curtain Do You Need?

The shower curtain that you need will depend entirely on the size and design of your shower. There is a set of standard sizes that will work for most homeowners. However, you’ll need to measure your shower to know what size will work best for you. There are also unusual shower shapes and sizes that require a specialty shower curtain that’s made specifically for that particular shower type.

What are Standard Shower Curtain Sizes?

Not every tub and shower is built the same, so there are specialty sizes. This could be an oversized shower that’s significantly taller or wider than a standard shower. There are extra small shower stalls that need a shower curtain much smaller than the standard. Then there are freestanding tubs that need protection on all sides.

If you have an oversized shower, you’ll have a much larger space that you’ll need to cover. A standard shower curtain won’t work, but thankfully, you can find shower curtains that measure up to 108 inches. If you don’t like the idea of buying a single large curtain, or if you can’t find one large enough, your second option is to buy two curtains. What’s nice about this option is that you can open them to either side, reducing the bulk of a single curtain piled upon one side. There are a couple of common extra-large shower curtain sizes.

A shower stall doesn’t have a tub but instead is a very small shower that can typically only fit one person. It’s quite small, lacking the space for you to move around. Because of their unique shape, shower curtains for shower stalls have a much smaller width and taller height. This makes them long and skinny.  Similar to the other shower curtain styles, there are standard sizes. To determine if the standard size will fit your shower stall, start by measuring the width. Do this by using a tape measure to measure wall to wall. Add the twelve inches to account for slack.

Start below the shower curb and measure up to the curtain rod height to measure the height. This can be slightly tricky because the shower’s curb tends to be only a few inches in height. Therefore, the curtain needs to be long enough to prevent water from splashing out while also not too long that it drags on the floor.

A freestanding tub presents a unique challenge because you need to guard against water splashing out from all sides. You should be safe with the standard height for the curtain. You need a curtain that will hang below the tub’s edge but not drag on the ground. To determine the width, you need to measure around the outer edge of the tub. This will give you the distance that you need to cover.

You will still need to add the extra 12 inches to ensure you have folds and give in the fabric. You don’t want the curtain pulled taut around the tub’s edge. Typically, people purchase two shower curtains for their freestanding tub. Each one covers a long side, making it easier to get in and out of the tub. You will also have more options since you will have a smaller width to look for.

A curved shower rod is nice because it gives you a few extra inches of space when in the shower. However, the curve also means the curtain has to cover a longer distance. Because of this, you’ll need a larger curtain than if you used a straight curtain rod. A curved rod will typically be six inches longer than a straight rod. If you use a 72-inch curtain, it will have a tighter look than what you want. Instead, opt for an oversized shower curtain. This will give you more extra fabric for a looser look. The result will look better, and it will function better.

How to Measure For a Shower Curtain

The first step is to measure the width of your shower. Use a tape measure to find out the distance from the one side wall to the other wall. It’s easiest to determine the distance in inches since this is the measurement that is used on the majority of shower curtains sold in the United States. Once you have the distance. Add twelve inches to give the curtain extra fabric so that it hangs with folds and you have extra on the ends for full coverage.

Take the two measurements, and you now have the dimensions needed for your shower curtain. If you can’t find a curtain with those exact measurements, then you can look for a curtain that’s similar but may be slightly off. A tension rod or adjustable curtain rod is nice in this situation because you can move the rod to achieve the perfect look. Perhaps you buy a curtain that is slightly longer than what you need. You can move the curtain up higher to get the right look.

Where Should the Shower Rod Go?

If there isn’t a permanent shower curtain rod installed, you will need to decide where on the wall to install one. Consider both its height and lateral placement in comparison to the edge of the tub. If you plan to mount a permanent rod, buy the curtain before mounting the rob. That way, you can make placement adjustments during the installation process to ensure you achieve your desired finished look. If you plan to use a tension rod, it’s much easier to move it to where you need it.

When it comes to height, you should install your shower curtain rod higher than the showerhead. Otherwise, you risk splashing water out of the shower and into the bathroom. Some people like to mount their rods at ceiling height, but depending on the height of your ceilings, this can be too high for the proportions of the bathroom.

Then consider rod placement laterally. It should be too far out from the shower because it won’t effectively contain the water. On the other hand, it also shouldn’t be too far into the shower. This will reduce the amount of available space you have while using the shower. A good general placement is to mount the rod over the tub’s edge or slightly in front of this edge. Slightly in front helps the decorative curtain to hang straight down, creating a nicer finished look.

Are Shower Curtains Supposed to Touch the Floor?

Whether or not your shower curtain touches the floor is more of a style issue than a sanitary one. You definitely don’t want a shower curtain that is so long that it pools on the floor. This won’t be functional and will harbor moisture for mildew to flourish. It’s up to you and your personal preference whether the curtain reaches the floor or not. However, if you choose to have a curtain that doesn’t reach the floor, it should be at least 4-6 inches longer than the top of your tub. You will also need a liner that stays on the inside of the tub to help contain the water.

Those who prefer to leave the shower curtain closed argue that doing so helps show off your chosen shower curtain. If you have a decorative one, then spreading it open showcases it. Otherwise, no one will ever see it bunched up against the wall. Leaving the shower curtain closed also looks nicer and more put together in the bathroom. If your shower is a bit dirtier than you’d like, leaving it closed hides this when you have guests. Leaving it closed also helps to prevent mildew by allowing air to flow around the entire curtain so that it can dry effectively.